She Has a Name: When Identity Cannot Be Whitewashed 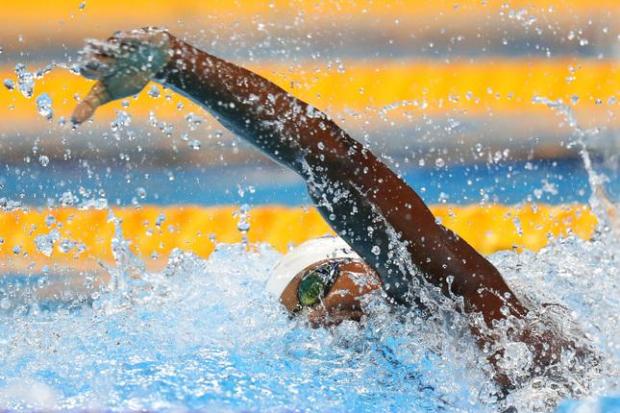 Sharing this post during the first Monday of Black History Month.

2018 Winter Olympics will kickoff this week. I had hope that we would begin to see names of black athletes who are slated to win big. One has to dig deep to find a faces of the individuals such as those on the Nigeria women’s bobsled team who will make its Winter Olympics debut. All of this reminded me of the 2016 Summer Olympics when Simone Manuel won gold and no one seemed to want to mention her by name.

On the evening of Thursday, August 11, 2016, history was made by a young woman by the name of Simone Manuel as she overcame a rear position and emerged victorious in the Women’s 100-meter Freestyle Swimming competition. Though tied at the finish with Penny Oleksiak of Canada, Ms. Manuel became the first African-American female ever to win a gold medal in Olympic swimming. I literally jumped from my sofa and screamed with unbridled excitement as I witnessed her approaching the final wall.

Then Friday came. Eager to attend a morning meeting to discuss READY Magazine, a quarterly print publication I co-founded with my daughter Dominiq, I entered the room carrying a remnant of pride over the previous night’s event. As I entered the conference room of highly educated Caucasian women laughing heartily, the host uttered the jaw-dropping words, “What about that minority swimmer? I watched with my mouth open in shock.” As I considered carefully how to respond, I held my pause, and she continued: “Gail, what about you? Could you believe it?” Making sure to have direct eye contact with each person around the table I shared, “Black people, Brown people, can do much more than run, play ball, wash walls, and clean.” Silence filled the room. I’m not sure anyone took a breath for several seconds.

Newspaper correspondents and sports reporters appeared to have had a similar challenge with calling Ms. Manuel by her name. One California newspaper omitted her name from the article altogether and gave the headline of a Twitter post that read, “Michael Phelps shares historic night with African-American (Mercury News). They later offered an apology and updated their headline to read, “Olympics: Stanford’s Simone Manuel and Michael Phelps make history.” Thank you for updating the headline, yet still, I question why her name had to be omitted initially.

Is it really that shocking? Do some people of lighter hue really subscribe to the stereotype and believe that Black people cannot swim? Is it really that difficult to believe that a young black woman could win Olympic gold in an event typically dominated by whites? Black people have been swimming for years. My brother, my cousin and I participated in a competitive city swim team in Columbus, Ohio. We never lost a city swim meet, even those where the competition included much larger and well-resourced suburban swim teams. My brother once shared, “Given the opportunity that the suburban children had, it would have been amazing what we could have accomplished together back in the day.”

I was another Black girl who consistently broke city records in freestyle, breaststroke, and backstroke, and fortunately, a white man named Coach Snow took notice. After winning the city finals in all my strokes, Coach Snow approached my parents about my racing for AAU. Coach Snow’s sponsorship granted me access to The Ohio State University pool and weight room as I trained continuously to compete on a higher level, an opportunity not characteristically offered to others in my community.

I will never forget the first moment I entered the pool area with swimmers who had benefitted from year-round access and training. They had been recruited to compete on a national and international level, but none of my competition looked like me. I am now 51 and never made it to the Olympics. I watched Simone Manuel that night with pride and just cried, saying to myself, “Thank you! You won this!” Strangely, I feel as if Ms. Manuel won it for me. Her gold medal makes my spirit leap. She accomplished something I was unable to do.

It’s not that black people cannot swim. Aside from the fact that so many do not have access to the same resources or opportunities as others, every human being is born with unlimited potential. Manuels’ accomplishment should force Caucasians to confront their outdated racial stereotypes. Please stop making assumptions about what Black and Brown people can do. We can do more than run, play ball, wash walls, and clean.

Persons of color, long aware of our value, contribution, and potential are now being recognized around the world. We are successful entrepreneurs, leaders, educators, decorated athletes, ambassadors, city officials, authors, governors, and senators. We have now occupied even the highest office in the United States of America.

I can only pray come Friday during the opening ceremony of the 2018 Winter Olympics we will begin to hear the names of black and dark brown people.

We do have names. It is time to see us and call us by our names. My name is Gail Dudley. Media Contributor. Community Advocate. CEO and Publisher of READY Magazine. Swimmer, and Lover of Life.