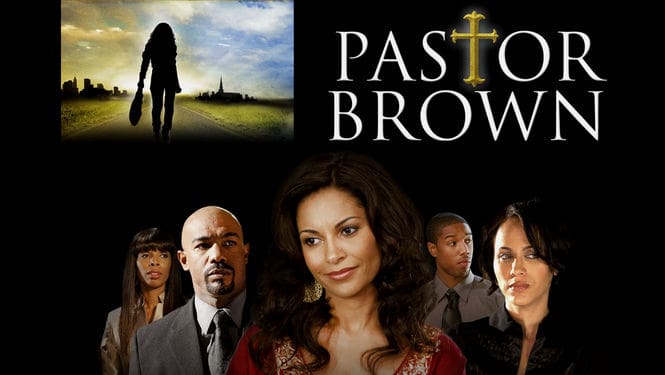 I have watched many movies in my lifetime. I have become emotional while watching movies, but today was different.

On this rainy Saturday after dealing with an excruciating migraine for twelve plus hours, I slowly came back to some normalcy. As the raindrops fell, I picked up the remote flipping through channels trying to find something that did not cause throbbing in my head.

Started out on one channel, but soon landed on a movie on Lifetime television. It was only a few moments left before the next film began. The title caught my eye. Pastor Brown.

The storyline began with Pastor Brown preaching to the congregation in a scene set in a church in Atlanta, Georgia. As Pastor Brown was preaching, he started holding his hands as if he were having a stroke. His daughter looked up and realized something was happening, and within moments Pastor Brown fainted.

In the next scene, you learn that he, in fact, had a heart attack. A telephone call was made to his daughter Jessica who walked away from her church life into a life of her own of pole dancing and living a life that one would consider risqué. She is asked to come home to be with her father and family after being away for ten plus years. She has a teenage son who had been raised by her older sister and her father, Pastor Brown.

Pastor Brown soon dies, but after sharing with the leadership of the church that he desires his daughter Jessica who had left years ago to succeed him.

Like with any situation there was resistance with Jessica fulling the seat of her father. She was the least likely person based on her lifestyle to serve in the pastorate. I must share that although I don’t live a life of Jessica this movie messed with me from the beginning to the end. At certain points of the movie, I cried uncontrollably. I could not help but ask God, “What do you want me to see?” With tears flowing down my face I knew something was happening on the inside of me. My spirit was changing. To some degree, it was transforming me.

Jessica’s son who at first had nothing to do with her began to change, and as his heart opened, he started defending her by asking people to give her a chance. Her sister started to see the good in her. As she was to go before the congregation with the current associate pastor for the congregation to vote on the next pastor, she was confronted with her past. Pastor Avery, the associated pastor, had information that could destroy her bid as pastor. However, God was with her. God touched Pastor Avery, to be honest, and not share the news of her past with the congregation.

The Sunday of the vote Jessica’s sister stood to share a few words. She asked for forgiveness and committed to protecting her sister.

Jessica then stood to share her words. She was transparent. She was vulnerable. She told the story of an ordained preacher, and seminary degree woman turned stripper was called back to fulfill her destiny. As she tells her story, she realizes that God had so much more for her return home. It was to mend fences and reconcile to her son, and sister. As she is sharing her story, she recalls her father Pastor Brown telling her to find her shoes. She connected finding her shoes with living out her faith in God.

I could not figure out why I had taken this fictional movie to heart until the last five minutes of the movie. It had everything to do with living out my purpose based on who God has called me to be, and not what others think I should be and do. My tears were tears of release from the bondage that had held me back over the last several years. I had been walking around hopelessly confused, and at times lying to myself of who I needed to be, and not who God chose me to be.

A fictional movie spoke to me in a way that no one and nothing has ever spoken to me before. God had tried many times to show me who I am and at the most profound place of my core, and yet I have ignored Him. My husband has spoken into my life so many times to the point that I have pushed myself to receive it, but I realized today I had never believed it. Prayer warriors have prayed me through some of my darkest hours, and yet I still found a way to slip back into that place where I wondered if what I have been called to do could, in fact, be fulfilled by me.

My life is not considered a straight arrow. On a political scale I find myself vacillating between moderate and progressive, and when I speak of it publicly my evangelical friends look at me sideways as if I have lost my way. There are times I will allow people to box me in, but today I have ripped the box into pieces.

I have multiple gifts. I have a prayer calling on my life. I have a teaching gift on my life. I have a writing gift on my life. I am a visionary. The list goes on and on. Today I realized that is why I have been confused. I have to some degree tormented myself wondering what one thing I am to do. Today, I am free. God has never called me to one thing. He has gifted me in many areas and now I must trust Him as things unfold. I am a writer, author, publisher, speaker, businesswoman, wife, and mother. I am an encourager, a motivator, a friend, and a daughter. I am a child of the Most High God. I am the head and not the tail. I am bold. I am confident. I am called to fulfill the shoes God has ordained for me.

No longer will I try to fit in an all size fit all shoe. I will open my life to the multiple shoes designed especially for me. I am fearfully and wonderfully made. Today, I have been freed from the chains that have held me back from my full potential. Today, I live my life based on what God has called me.

What about you? Will you find your shoes?