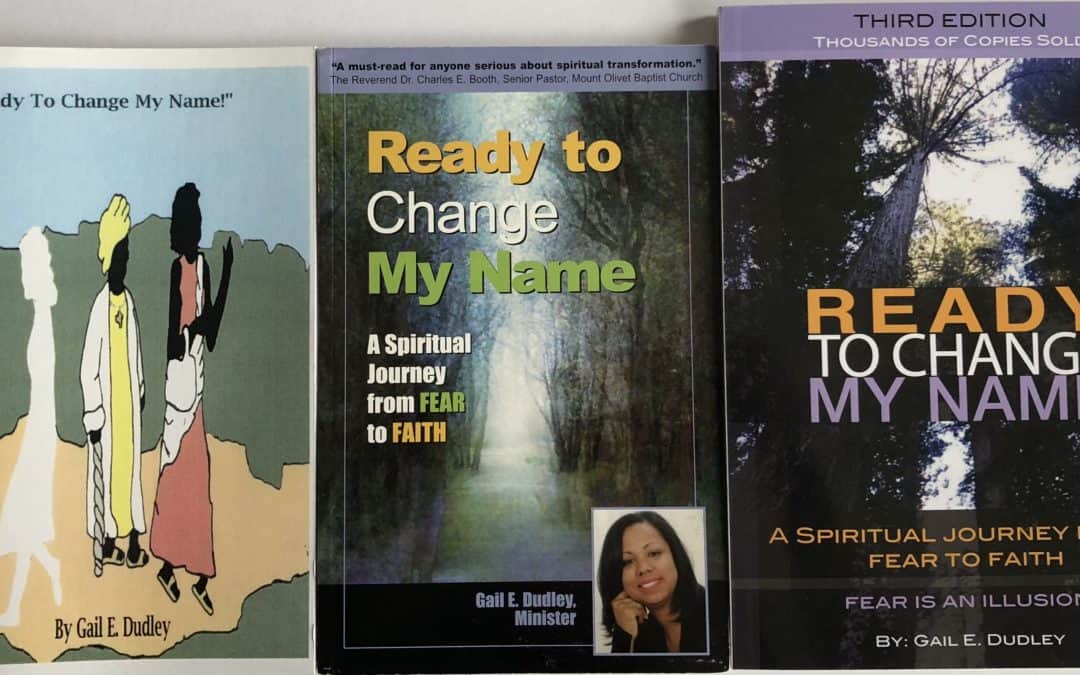 It was a Monday morning—April 2nd to be exact—that I woke up with the need to reflect on my life. It was the week we were releasing the spring issue of Ready Publication with the theme “Prayerfully Savvy.” I was busy, but I still had a lot of questions in my mind and wanted to take the day to process what was next for me. After my time of meditation, prayer, and exercise, I was led to go through the books in my office. I removed a basket of books from the top shelf and came across the very first book I had written. I didn’t know if I should laugh or cry.

I remember clearly the day I began writing my book “Ready to Change My Name: A Spiritual Journey from Fear to Faith.” This book came from a sermon I had preached during a women’s day in Lorain County in 2002. A few women at the church reached out to me asking me for my notes because the recording from that morning had turned out blank. I had to admit to the ladies that I do not preach from notes. I only have a few words written down trusting that God will deliver the words He wants delivered after I have spent time with Him in prayer and the study of God’s Word. The ladies were eager to send me the notes they had taken that morning hoping it would help me recreate the message. As I was reading their notes, I realized I could turn the message into a book instead of merely a couple pages of sermon notes. And so I did.

After I had completed my first book, I felt I had accomplished something significant in my life. I wanted to show the world that I had written a book! Little ole me! A person who doesn’t excel at grammar, but has always had a love for writing. No matter how hard I try, I always find myself getting frustrated when attempting to write with excellence. I used to hide behind my writing flaws, especially after being criticized by people who call themselves language experts; although I do thank God for editors! However, something happened to me during the time I took the risk to write this particular book. I knew I had to take my own words and move from my writing fears to faith.

I will never forget the moment when I ordered the first hundred copies of my book. I also ordered white boxes with clear lids to give each book away as a gift. At that time, my husband was the pastor in Oberlin, at Mt. Zion Baptist Church. The church had opened a life center. I decided that I would debut by book to all the women of the church during our women’s gathering. It was an Oprah moment! “You get a book! You get a book! You get a book! Everybody gets a book!” I was so proud of my accomplishment that it never occurred to me that my “book” was actually a mere pamphlet, saddle-stitched down the side. I remember some of the ladies laughing as I was handing out the boxes to each woman present. Some were even whispering. That didn’t matter. I had dealt with my fear and written a book. Yes, to me it was a book at that time. I had written a book. I was able to see it through the pamphlet. And so did other women. Something about the words I had written touched the lives of so many women. It went from Oberlin, to Lorain, to Elyria, to Cleveland, to Columbus, to Atlanta, then around the United States of America. I was left wondering, what had just happened? What words had I written that connected with women at this level? The pamphlet turned into real a book a few years later. It grabbed the attention of both Amazon, and Barnes and Noble. Then a third edition was released. And now, more than a decade later, every time I think this book has made it rounds and will soon die, it picks up steam again.

Finding the pamphlet and book on April 2nd brought me to my knees. It was the Holy Spirit telling me to look at how He has blessed me and carried me over the years. As I type this blog post I have tears in my eyes. How many of us give up because other people laugh at our work? What if I would have allowed those laughs stifle me? What if I would have looked at myself as irrelevant and insignificant? I know what would not have happened. I would not have written and published nine books; I would not be publishing Ready Publication, an international magazine, with my amazing daughter Dominiq; I would not have an international publishing company alongside both of my adult children, Dominiq and Alexander; I would not be a part of an amazing writers’ group “The Chapter”; I would not have been accepted into a distinguished writers’ guild “Redbuds.” And the list goes on.

Never despise small beginnings. Never allow others stop you from doing what you envision. Three women asked for my sermon notes. That one simple request went from notes to a book, and I went from being an author to becoming a publisher. This is only the beginning. The best is yet to come. Not just for me, but for you as well.

Let’s talk. What is holding you back from doing what you have been destined to do? What hopes and dreams are you holding on to that you believe will never come true?

Check out the magazine here: ReadyPublication

To purchase my book Ready to Change My Name: A Spiritual Journey from Fear to Faith click here: GailDudley